What it isn’t: Lying, Deceiving, Cheating. Perhaps a little bit of hacking your way to success?

The Imposter Syndrome: A psychological state where one is convinced that one’s success is not deserved or earned but is attributed to luck and deceit, in spite of evidence to the contrary. Those with imposter syndrome feel they don’t belong with their achievements and fear that they’ll be discovered as scammers, liars, or “intellectual frauds.” They believe they are unqualified and discount their abilities and skills that led to their success. A host of other problems like low confidence, worthlessness, poor life-satisfaction (because you feel like a fraud) and low self-esteem are common. About 70% people feel this way at some point in time and almost all of us experience its antecedent called “self-doubt”.

In the cliche "fake it till you make it" advice, there is no lying or deceit. You just leverage easy-to-manipulate aspects of behavior to make the actual effort easier. Click To Tweet About 70% people feel like imposters and intellectual frauds at some point in time and almost all of us experience its antecedent called "self-doubt." Overcome it by affirming your skills and isolating negative self-judgments. Click To Tweet

Most of the sensation around this phrase emerged after Amy Cuddy’s Ted talk about her study which had a viral takeaway: power-posing, an expansive body posture like Superman’s, can uplift one’s mood and attitude towards the self while exuding power. It seemed like an obvious hack to succeed in the corporate and dating world. However, it was met with heavy criticism from researchers as studies failed to replicate her findings on how power-posing helps. Eventually, after a lot of studies, the consensus is that there is some validity to the idea that power posing helps in improving mood, displaying power, and improving positive feelings about oneself.

We are going to go beyond that and look at a more holistic version of fake it till you make it.

Use this as a growth strategy, not a tool for deception.

A practical overview of “fake it till you make it”

People often use this phrase as a hack to build confidence and game a social dynamic to their benefit – if not go through their whole graduate degree and career steps like interviews and managerial speeches.

Is it true that smiling can make you happier? Yes. We cannot draw a clear cause and effect on what happens first in the brain or overt behavior. Signals in the brain could be a result of preceding behavior and influence subsequent behavior. We smile because of our thoughts, and we have new thoughts because of a smile. It’s a feedback loop. Smiling induces a mood that it is natively associated with: a good mood; to a weak extent. Weak, but non-trivial extent.

Is it true that people can spot fakeness? Yes. If you brag about achievements without giving any information on how you “made it,” people will see through it and spot the fakeness. Even children will see through it. This is why you cannot convincingly act “superior” without a clear demonstration of “superiority.” Well, unless you are an actor and can mislead.

Is it true that you can fake a personality and reap the benefits of it? Yes. Acting more extroverted can improve well-being. Why? Because, for an under-confident introvert, acting “extroverted” usually means being more assertive, outspoken, and bold. These are actual behaviors that get better with practice. So faking it is essentially practicing it. However, for those who are extremely introverted, acting extroverted can be exhausting and temporarily worsen well-being.

The key to "fake it till you make it" is to make your new learning and new internal dialog intuitive and automatic, so you cross emotional barriers and disrupt negative attitudes that stop you from succeeding. Click To Tweet

People in the professional world fake it and pretend in a way that influences others. “Impression management” that’s what researchers call it. In professional and formal interactions, you can communicate information to others on two levels: The implicit emotional level and the evaluated objective level. You can manipulate your impression through deliberate postures, voice, clothing, eye contact, etc. That influences the recipient, and it is enough to fake something in a desirable way. This is tricky because focusing on objective information can call-out insincere impression management.

In the clinical sense of therapy and self-improvement, researchers and practitioners use a technique called “reflecting as if.” The method is simple.

“Reflecting as if” or acting “as if” is a technique to change the narrative and behavior in a deliberate way. It’s more about creating an alternate version of yourself when you don’t like how you think or behave in a particular situation. Looking at role models from reality or fiction can be a starting point to decide how you want to behave – reading fiction can improve empathy and perspectives too. Once it is defined, traceback the steps that make it possible for you to act accordingly. While reflecting, it is useful to spot cognitive biases and overcome them so you can change your perspective.

Combining a mental state for pretending and impression management is a powerful strategy. Its why dressing up for a certain mindset works for many. People dress up in office clothes for productivity, dress up in formal clothes to answer phone interviews, etc. It’s the association between your behavior and mindset that creates a feedback loop and helps you achieve something. Clothing, mindset, and environments are excellent “context builders” that help you make it when your mind tells you otherwise. It’s a goal-directed role-play with many associations that create a framework for your behavior. These contexts encourage unique behaviors that suit the context which would otherwise feel unnatural. So go ahead, dress up like a boss, dress-up for a phone date, rearrange your room, adopt a new mindset via cognitive empathy, and act with a mental framework (a novel mental model).

The “practice” and “emotional regulation” in faking it

A lot about fake it till you make it is conditioning and tolerating. Negative emotions can hold people back and prevent them from taking action. A sense of deserving failure, a need to self-sabotage, low faith in one’s abilities, fear of failure, feelings of inevitable impending doom, etc. are common feelings. They are precisely those emotions that hamper personal growth, encourage procrastination, interfere with self-improvement activities, and nullify hard work for personal, professional, and vocational growth. These emotions have a certain level of “believability” as we see in those with the imposter syndrome. Overcoming the negative emotions is about reducing their “believability.” A set of techniques called “cognitive defusion” is highly effective in doing that. Head over here and read about them.

Doing something by faking your way through it creates opportunities and forces repetition of behavior that either helps you learn or helps you get comfortable with negative experiences/feelings.

Faking a mood or a mental status as you engage in a task you want to “make it” in creates an association between the desired mood and task. Faking a good mood can upregulate a negative mood and do two things: One, improve the mood in modest amounts and two, motivate (or reduce demotivation) to work on your abilities. Music is a powerful mood regulator so you can deliberately choose the music you like to uplift your mood and create an association between a mildly aversive job and evaluate it in a positive light. Some people choose heavy metal music to cope with negative experiences too. A good mood is a powerful way to maximize learning by changing your cognitive make-up.

Repetition and associations build habits and sturdy neural connections that refine over time, thanks to synaptic plasticity and Hebb’s law. The more you practice and the more you refine, the more automatic and natural the habit feels. Language is one of the most iconic examples of this. We learn new words and before we realize it, they are a part of our natural vocabulary. But sometimes, the context doesn’t demand newly learned fancy words and that makes us feel a little pretentious. Even others recognize those moments. Remember an earlier point – others see through fakeness when it is not warranted or justified through additional information. In other contexts, we choose words from a different language to put our thoughts across (it’s called code-switching). That appears like a deliberate act but it is often very intuitive because of the tight neural relationship between words and meanings in given contexts.

With enough practice, you would’ve faked it until you made it without feeling insincere.

How to overcome the Imposter Syndrome

1. Affirm your skills and expertise that helped you succeed

Affirmations are ways in which we tell ourselves what we are and what we can do. These affirmations range from “self-talk” to “seeking validation” from others. Depending on external validation isn’t always a good idea but there are times you need to prove something to yourself and others can help you do that. Reassure yourself of your abilities and accept that you have what it takes when the evidence is present. If the evidence is weak, focus on affirming your attitude toward growth and progress. The evidence will present itself over time. Here is how to affirm yourself using positive self-talk.

2. Take a mental note of evidence that shows you worked towards your success

People with imposter syndrome believe they are intellectual and professional frauds because their underlying belief system is colored with low confidence, low self-esteem, and a perceived disconnect with their achievement. However, if you aren’t an actual fraud, there is real evidence that shows you earned your success, even if luck and external help played a role. Look for that positive evidence that confirms your effort, perseverance, skills, and abilities.

3. Separate feelings of worthlessness & competence from your achievement

There is a good chance that your effort, skill, and confidence is of value and genuine. If it weren’t you’d have failed miserably because of the high demand and pressure to perform precedes success. It’s possible that you are lacking in skills but that doesn’t mean your achievement was only a stroke of luck. After all, achievements require skills. So the emotions you feel regarding incompetence and worthlessness are really just beliefs and not judgments about your work and productive output.

Fake it till you make it is about manipulating behaviors, influencing, changing mindsets, tolerating thoughts, and using indirect strategies to help you put in the effort and succeed. It is not about lying. Click To Tweet If you feel like an imposter, separate your self-defeating emotions from the evidence that shows you are adequate and capable of achieving what you've already achieved. Click To Tweet Reflect and acknowledge your work and the external feedback that shows your achievement is earned to avoid the imposter syndrome (feeling like you don't deserve your success and you don't belong) Click To Tweet Smile and rectify your posture to improve your mood and confidence if you have nothing else. Positive emotions are important for growth and widened perspectives. Click To Tweet Practice and repeat behaviors with a deliberately adopted mindset. Use "reflecting as if" (step back, choose an alternative, act on it) and impression management to associate a good mood with new intuitive behaviors. Click To Tweet Reduce the believability of negative emotions that hold you back and act against those self-defeating thoughts until you tolerate them or build a new emotional context. That's how you fake it till you make it. Click To Tweet 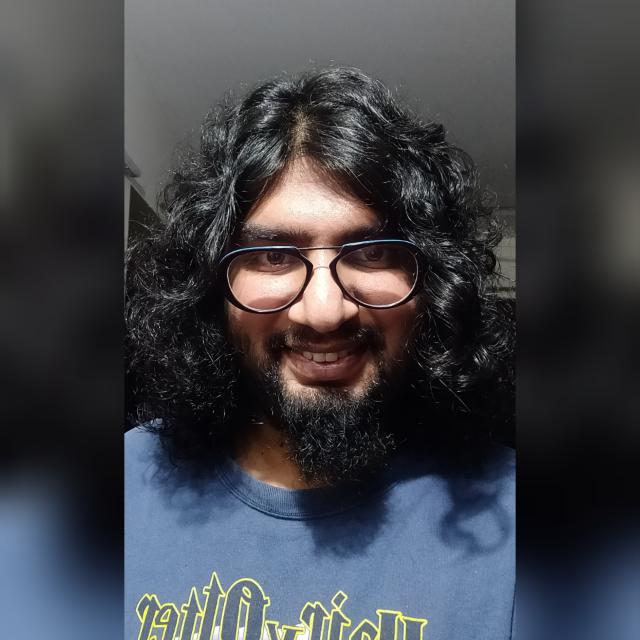 Hey! Thank you for reading; hope you enjoyed the article. I run Cognition Today to paint a holistic picture of psychology. Each article is frequently updated with new research findings.

Procrastinating with your Phone? Here’s why & how to stop it. 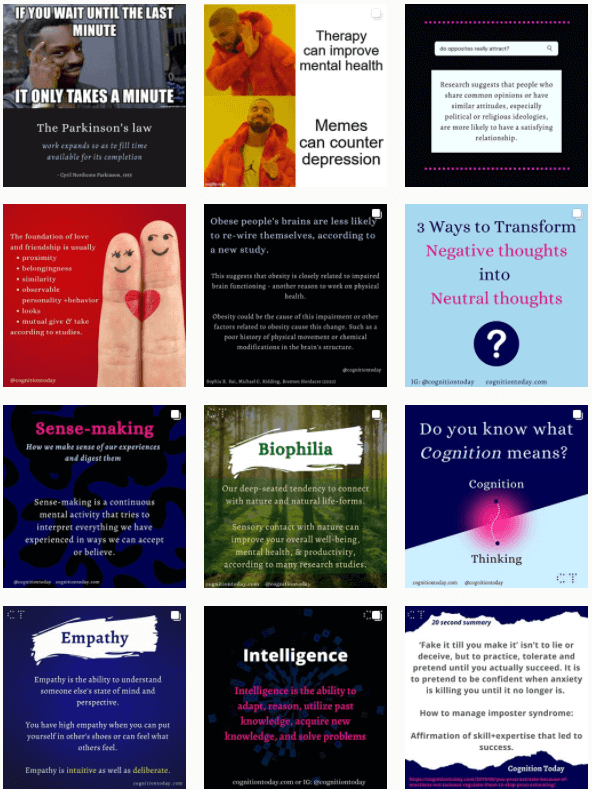